Roving Gambler from Glen Duncan Posted on May 30, 2019 By John Lawless 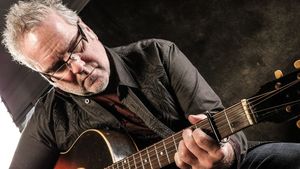 Folks around bluegrass have known Glen Duncan for years, mostly as one of the top fiddlers in the business. He is a former Blue Grass Boy, and has recorded with almost everyone in Nashville – Earl Scruggs, The Osborne Brothers, Jim & Jesse McReynolds, Roy Acuff, Ralph Stanley, Mac Wiseman, Doyle Lawson, Larry Sparks, and Del McCoury to name just a few.

Glen has also added his fiddle to hit projects from a great many top commercial artists, including Shania Twain, John Denver, Merle Haggard, Kenny Chesney, Vince Gill, Dolly Parton, Randy Travis, and The Statler Brothers. That list truly does go open and on.

He is also known as a talented producer, and was a founding member with Larry Cordle of Lonesome Standard Time, and of bluegrass supergroup Longview as well.

But did you know he is also a singer, and plays all of the instruments in the bluegrass band? Duncan has a new project set for release later this year with the Engelhardt Music Group, and a debut single is out this week to give a flavor of what he has in store.

It’s a cut of the old favorite, Roving Gambler, with assistance from Ned Luberecki on banjo, Cody Kilby on guitar, Casey Campbell on mandolin, Dennis Crouch on bass, and Aubrey Haynie on fiddle. Glen sings the lead, and takes the fiddle break, with harmony vocals from Eddie Sanders and Don McAfee.

Roving Gambler will be available on all the popular download and streaming services starting on June 7. Radio programmers can find it now at AirPlay Direct.